Division of Debts in Illinois Divorces 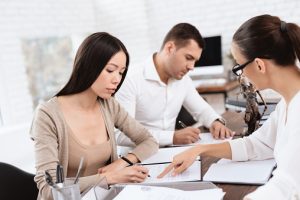 You probably know that one of the most commonly cited reasons for divorce is financial trouble. Arguments about money have doomed many marriages. Unfortunately, those same problems can and will follow you into divorce. During divorce proceedings, one of the most potentially contentious issues is how debt is to be divided.

How debt is classified during divorce proceedings

The first step in debt division is determining how much marital debt, or shared debt, the couple has. In general, debt that was accrued prior to the marriage and is only in one spouse's name is considered separate debt, which is not subject to division. Debt that was accrued during the marriage, regardless of the name(s) on the account, is considered marital debt and must be divided. For example, if one spouse financed a car during the marriage, the auto loan is usually considered shared debt, even if only one spouse's name is on the loan itself.

Illinois is an "equitable distribution" state for property and debt division. Rather than just dividing the debt 50/50, the court looks at a number of factors, including:

Based on these factors, as part of the divorce decree, the court will designate which spouse is responsible for repaying each debt.

As with property division, debt division can become complicated when separate and marital debts are commingled in the same account. If one spouse opened a credit card before the marriage but accrued most of the balance during the marriage, is it separate debt or marital debt? The short answer is "it depends" - an attorney can make a reasonable argument either way, depending on the circumstances.

Another challenge is that the court only has authority over the divorcing spouses, not the creditors. A divorce decree does not affect a creditor's right to seek repayment.

For example, suppose a husband and wife have a joint credit card. When they divorce, the judge rules that the husband has to pay off the balance. If the husband later stops making payments, the credit card company can still go after the wife because her name is still on the account. She has legal recourse, including going back to court to hold the husband in contempt. But in the meantime, she may have to make payments or see her credit score suffer.

How an attorney can help in this situation

Because of these potential complications, we usually recommend that couples pay off as much of their debt as possible before the divorce is finalized, whether that's prior to filing or during the divorce proceedings. It's much better to start your post-divorce life with a clean financial slate. However, we know this is not always feasible. If there are debts that will persist through your divorce, you need to take proactive steps to make sure you're protected.

In such a situation, an experienced divorce attorney can make a meaningful difference. The terms of debt division, like property division, are always negotiable between the spouses. If negotiations don't bring you to a reasonable resolution, we know how to build a strong argument that advocates for your interests so you are not saddled with debts you can't afford to pay. Our founding attorney, Charles Courtney, Jr., has a background in economics, giving us special insight into complex financial situations.

If you're going into a divorce with significant debt, or if you are dealing with debt-related issues in the wake of a divorce, contact us for a free consultation. We'd be glad to discuss your situation and potential legal options.