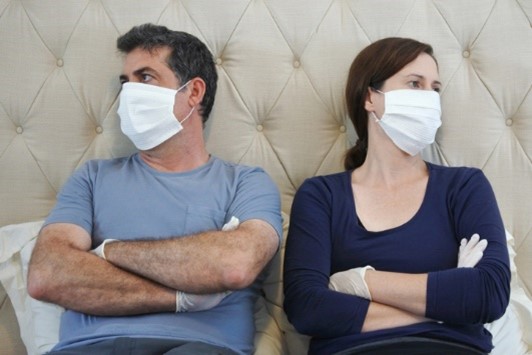 Promising to be there for your spouse through “better or worse” is a common vow people make when getting married.

New research says that couples who are willing to say “I do” when things look their worst have a higher chance of staying together than those waiting for “better” days.

Judging by past disasters, marriages that start amid hard times are more likely to endure than those that begin during moments of prosperity.

University of Georgia professor Stephen Mihm made this discovery by surveying more than 100 years of U.S. and international marriage and divorce data. He saw significant shifts in both around hard times like the Great Depression, wars, environmental disasters, and the Great Recession.

This may have implications for the surge of people getting married in 2021 after COVID-19 pandemic restrictions were rolled back.

Will the current marriage boom result in a tidal wave of people filing for divorce over the next several years?

Data scientist Randal S. Olson has his own research on the topic of hard-time marriages.

Olson surveyed 144 years of U.S. marriage and divorce data collected by the Centers for Disease Control and Prevention. He poses the questions: Why are we seeing a surge in weddings and engagements and what will happen to these “COVID couples” down the line?

Olson speculates that there are more marriages around major disasters and unfortunate events because people form closer bonds during tough times. Tragedy forces people to reevaluate their life choices, priorities, and partners, he says — contemplation that can lead to marriage or divorce.

The current jump in marriages is being fueled, at least in part, by couples who delayed nuptials due to the pandemic.

What the data says

Research by Mihm and Olson lends perspective to the ebb and flow U.S. couples are experiencing. Among their discoveries are:

1. Economic hard times suppress weddings. The number of marriages dropped by 25% during the Great Depression due to economic hardship.

2. Wars almost always spark significant increases in weddings — it happened right after World War I and World War II. The only significant spike in divorces in the U.S. in the past century and a half took place right at the end of WWII when impulsive couples in ill-conceived marriages broke up.

3. As post-disaster marriages increase, so too does the divorce rate.

4. Environmental disasters can also spur marriages. After a massive earthquake hit San Francisco in 1906, a wave of marriages overtook the city. In just one month post-disaster, a surge of people thrown together in refugee camps met, fell in love, and immediately got married. And after Hurricane Hugo hit Florida in 1989, counties that were officially declared “disaster areas” saw more marriages and divorces than counties that were not as hard-hit by the storm.

5. Right now, marriage rates are at the lowest they have ever been in recorded U.S. history.

Following statewide and national trends, St. Clair County also recently experienced a decline in marriage and divorce. Both dropped from 2010 to 2016, according to the most recent information available from the Illinois Department of Public Health.

There is no hard data on marriage and divorce numbers yet. Knowledge of the current wedding boom is backed by massive anecdotal evidence of increased demand in related industries such as jewelry, event planning, venue rentals, dress and tux shops, caterers, etc.

Do I need a lawyer to get divorced?

You are not required to hire a lawyer to get divorced, but having someone in your corner who is experienced in couple’s law, the Illinois justice system, and family dynamics can be an enormous help to your situation.

Marital division is difficult for everyone. Our law firm has built a reputation for giving our clients the information and support they need during a divorce. We understand what is at stake for you, and that's not something we take lightly. That's we work so hard to get the best possible outcome in your divorce.

Our knowledgeable divorce attorneys can represent you in many various divorce proceedings, including but not limited to marital property division, parental responsibility, paternity, child support, visitation and custody, alimony, litigation, and military divorce.

We offer free case evaluations to potential clients in the Bellville, St. Clair County, and greater Illinois region who are considering divorce. Contact us today to see how we can help you.